Five years ago my parents moved to northwestern Connecticut where they found their new neighbors to be a bit wilder than their last. There are the two black bears who come around every autumn to strip the shrubs of their berries, the swallows that nest in the eves of their barn each spring, and the fox who occasionally steals one of their free-range chickens. And then there is the snapping turtle that lives in the small pond at the end of their driveway.

If you grew up in the east, then you were told tales of snapping turtles snipping off the toes of those who dared to swim in their realm. As a child you swam anyway, but the thought was always with you. A stick or stone or small fish that rubbed your leg in the murky depths of a New England pond could be the jaws of a snapping turtle. But no one ever knew anyone who had their toes snipped by a snapping turtle. The turtles would rather bury themselves in mud at the bottom of the pond than relieve you of your toes. Out of water and on terra firma, though, it’s best to give way to a snapping turtle.

One spring day my parents watched as the snapping turtle lumbered up their long driveway toward a mound of stone dust they had planned to use in their barn. But the snapping turtle had plans of her own and laid 20-50 white eggs the size of ping pong balls in the stone dust. Well, my parents wanted to be neighborly so they left the stone dust pile right where it lay. And every spring for the next few years the turtle returned to lay there. 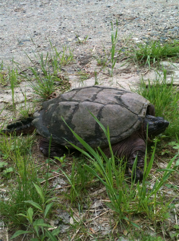 Snapping turtle on her way to nest. 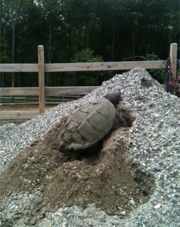 Digging her nest in the stone dust pile.

When my parents could delay no longer in using the stone dust, they worried for the turtle. Where would she nest? Would she find a suitable alternative? Would the new nesting site be as easy for her to dig into as had been the pile of stone dust? They learned the answers to these questions the following spring when the snapping turtle returned to lay her eggs in one of their raised garden beds. My parents now raise turtles alongside carrots, peas, and radishes, although unlike the vegetables, the turtles require no tending at all – only acceptance for these ancient creatures that were here before the dinosaurs. Here is a poem my mother wrote about her snapping turtle neighbor.

She heaves her terrible body out of the black mud,

You know the movie I mean

Where the townsfolk race away, screaming from the hill,

the monster has yet to make a single aggressive gesture.

Hasn’t made so much as an off-color remark  even.

I understand the running.

It’s the screaming that puts me off.

This one has come to lay her eggs in our garden.

Wreak havoc on the sugar snaps.

I lie down in the grass

And watch her side-on. She fills my vision. Big as a footstool.

Even so, her jaws can snap a shovel. Or so they say.

Tank of a body.

A shield of armor formed from earth’s uprising.

When the earth settled down again, she came together, like a boulder.

My breath stays. Why so afraid all the time?

She rolls one dreadful eye towards me.

It’s not her fault. It’s just that she never blinks. Well, almost never.

I wish I could put my hand on her knobby forehead, let her rest her tired eyes.

Karen Baril is a freelance writer based in Connecticut. Her articles have appeared in Equus, Equine Journal, and Trail Rider Magazine.

The snapping turtle getting ready to lay her eggs in the garden. 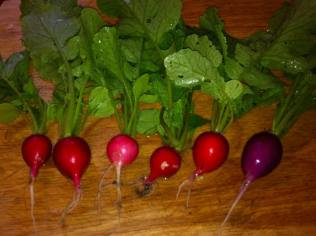 Radishes grown in the garden.