One morning last June I was in the middle of a bird survey near the terraces at Mammoth Hot Springs just inside Yellowstone Park when I heard a voice behind me say, “Excuse me.” I hoped she was talking to someone else, but she persisted. “Excuse me,” she said again more loudly. As I turned toward her she pointed at the terraces, which in that particular spot are the brightest white imaginable, almost unnaturally white like the teeth of movie stars, and asked, “Is it an ice mountain?” I laughed — not at her but in surprise.

The Mammoth terraces have been a fixture in my backyard for the past decade, although they are anything but fixed. Springs erupt in unexpected places while others go dry. Strange formations grow then collapse under their own weight. Water boils from the ground in pools so clear and blue they look like the sea in the southern Pacific Ocean. They make you want to dive to their depths and explore the vents from which they bubble, but that would be a mistake.

Mammoth Hot Springs is not an ice mountain at all; it is a boiling mountain. It is the aboveground manifestation of an ancient but still active volcano. A volcano capable of changing world climate should it erupt. A volcano that rumbles the ground every now and then letting us all know that it is still alive.

But the ground above is every bit as alive as the ground below. It is alive with microbes and bacteria — organisms impossible to view with the naked eye, not individually anyway, but which form a tapestry of colors so rich in a landscape that is often perceived as lacking in imagination. It’s not that Yellowstone is without color, but the overall palette is more understated than other places I’ve lived. It took me many years to truly appreciate the subtlety of sagebrush and the various hues of coniferous forests from Douglas fir to whitebark pine, but the effect at Mammoth Hot Springs is immediate.

The hot springs and terraces appear as an orange creamsicle in parts or a layer cake with dripping butter cream frosting in others. Sometimes the frosting is pink. There are brilliant green channels running alongside rose colored ones and filamentous spaghetti streamers near salt crusted vents. These colors are created by thermophilic, or heat-loving, bacteria and microbes. They thrive in water that is often well above boiling. Some feast on arsenic and produce sulfur — an aroma which gets everyone’s attention. 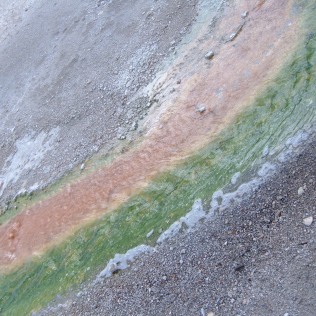 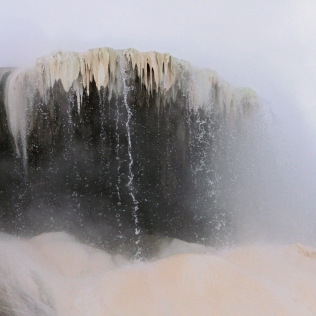 Organisms that live in extreme environments like Mammoth Hot Springs are known as extremophiles. They were some of the first life forms to appear on Earth three billion years ago — a time when Earth’s atmosphere was inhospitable, at least for us. We have microbes to thank for the oxygenation of earth’s atmosphere. Microbial communities have been around so long they are everywhere – in deep sea vents where light never shines, deep underground feeding on oil (some even feed on asphalt), they are floating in the atmosphere. We breathe them in and they live throughout our bodies. Without them we would die.

If you look closely into one of the pools, I mean really closely, like get down on your knees and peer into a shallow pool of water, you will see a miniature coral reef. In fact, these structures are made of the same minerals as a coral reef. Beneath the surface of Mammoth Hot Springs lies a thick layer of limestone – fossilized coral from when Yellowstone was covered by an ancient ocean. Water running down the surrounding mountains enters a network of fissures and channels woven through this limestone, is warmed by the volcano and then percolates to the surface. As the water reaches the air it precipitates calcite and aragonite known as travertine.

But it is the microorganisms which control the growth rate and appearance of travertine. And they grow fast – 5mm per day which doesn’t sound that fast, but is 1 billion times faster than at other hot springs found worldwide. If you were patient enough you could watch travertine grow, but we are not enveloped in it because the life span of a spring is only about 3-5 years. The travertine, with the help of microbes, grows so quickly that they collapse under their own weight and a new spring emerges somewhere else creating a landscape that changes fast enough for us to notice — a rare treat in the world of geology.

It’s no wonder that the visitor that June morning thought Mammoth Hot Springs was an ice mountain. She ascribed the familiar to the unfamiliar because an ice mountain is more easily understood than boiling pools of rock and microbes that are heated by a volcano beneath an ancient sea. Mammoth Hot Springs isn’t familiar at all. The life forms growing there are so bizarre that scientists use extreme environments like the springs at Mammoth to determine if there really is life on Mars. I never knew I lived by the ocean on another planet.

6 thoughts on “Is it an Ice Mountain?”