A year ago last August Hilary, Julianne, and I began Writing the Wild. A year at the start seems like a long time. At the end, though, after the earth has made another revolution around the sun, and we’ve reveled in the colors of autumn, skied our way through winter, sloshed around in spring’s never-ending puddles, and delighted in a sweet but short summer, it does not seem long at all. The living of a year is far shorter than we imagine at the start. 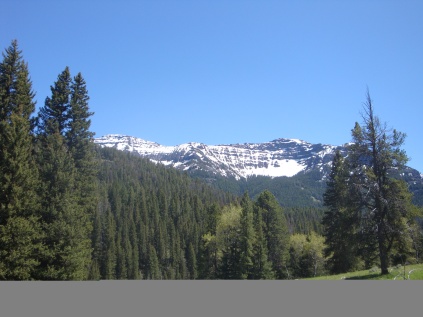 I have written before that time for me is measured by the movements of wildlife — elk calves stashed under porches in spring, the lure of wildlife into the greenest reaches of the high country during summer, bull elk bugling on cool autumn nights, and bison driven into Mammoth by the park’s harsh winter interior. But time can also be measured on a finer scale.

August, for instance, is the month of fire in the west. The slow roll of summer works itself into a frenzy of late afternoon thunderstorms that throw white lightning at the mountains.

We wait. A fire creeps around in the undergrowth for a while, undetected and gathering strength by foraging on a thick layer of pine needles, fallen logs, and dried grass. It soon wraps itself around a stand of trees and turns the sky hazy orange, and the scent of burning pine fills the air. A shift in the wind, or better yet a good soaking, might turn the sky blue again – at least for a time.

When I was working as a field biologist, August meant that I could stop to breathe for a moment. The bulk of the field work had been done. All the data we were going to collect on nesting birds had been collected, and now young birds were dispersing from their natal territories to find new ground.

August is also the month when young birds flit clumsily among the branches of the cottonwood that shades my yard. Tufts of body feathers stick out at awkward angles waiting to be preened back into place. They vocalize in ways I don’t recognize. They are learning to sing, and in the beginning they are not very good. They listen to their parents calls and songs and to those of their neighbors. Listening is part of their learning process, but so is instinct. They “know” what sounds right and what is a bit off.

A bird learning its own song is not unlike the writing process, I think. I am finding my voice, too. At 37. For the first time. With these blog posts I have experimented with what works and what doesn’t. Of course I want everything I write to always work, but that is not how experimentation goes.

Writing the Wild has evolved in my mind over the last year. The decision to ask Julianne and Hilary was based on the knowledge that they are both great writers with strong voices of their own. They are also thoughtful and they are lovers of wilderness. They know just what it means to be a part of wilderness rather than apart from wilderness. They know that there is no becoming a part of anything because we’re already interconnected. We cannot break that link even if we tried. Even if we move to New York City or become injured and can’t get out for a time. It was for these reasons that I asked them to join me and I am grateful they enthusiastically agreed. But it also did not escape my attention that they are women, too.

I’ve always been an avid reader, but when I began writing I also began reading more carefully. I paid more attention to language, its fluidity, and when I was surprised by a certain description, and especially, who I was reading. There was a trend. Many books, the most well known and beloved books of our culture, were and are written by men. Many of these books I cherish. Thoreau still makes me want to sell everything and move to a cabin in the woods for the summer, or for the rest of my life. I want to wander the deserts of Utah whenever I read Edward Abbey, and E.O. Wilson cemented firmly my desire to become a wildlife biologist as a young girl.

But I became eager to hear more women’s voices. Not necessarily books written for women, but books written by women. There are many great women writers whose books I now own and know I’ll read over and over like Pilgrim at Tinker Creek by Annie Dillard or When Women Were Birds by Terry Tempest Williams, and Partings by Ruth Rudner, or a book of poetry by Mary Oliver. These are women who write not only to understand their stories, but to understand the world in which they live and that is what Writing the Wild is all about.

We using writing as a tool to understand our relationship to wilderness wherever we find it. Wilderness could mean a backpacking trip in the famed Bob Marshall Wilderness of Montana or a walk down a wooded path in an eastern hardwood state forest. It could even mean birding in your own backyard. But this blog doesn’t simply describe our adventures; we aim to dig a bit deeper. To get beneath the crust of the earth and of our souls to discover what lies beneath. Writing is as much a path to discovery as is a wilderness adventure.

Think you don’t have anything to write about? Sit with a pen and paper for 10 minutes every day for a week and write whatever comes to mind. Set a timer so you’re not peeking at the clock every 30 seconds to see if your time is up. Once you start let your pen fly and write whatever comes to mind. Don’t stop. Just keep writing. If you write about the laundry so be it, or maybe you write about your annoying cat who binge eats then throws up all over your carpet. It’s whatever is in your mind at that moment. There is no trying. Just writing. This is called free writing and it is a trick writers use to clear the cobwebs from our minds so we can get to the heart of our stories.

Most of it will be drivel, and that’s OK. You’ll find, though, that every so often you will hit upon a seed of an idea that you have a feeling is good. Your instinct will tell you it’s good. Take that seed and plant it. With a bit of work something beautiful just might grow out of it. You’ll be surprised at what you discover about yourself. I promise.

Thank you to everyone who has subscribed to Writing the Wild or has read our posts online over the past year. We hope you keep reading and perhaps join us on this journey into the wilderness of our own minds. Please visit our submissions page to learn how you can contribute.

3 thoughts on “Writing the Wild Turns One!”