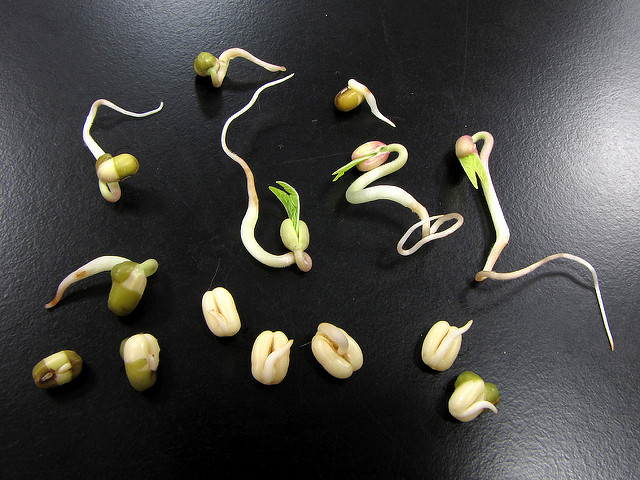 “How much is a hill of beans worth?”

So asked farmer and outdoor educator Ryan Yoder  at a recent presentation hosted by the Sierra Club. Thirty or so New Yorkers sat in rows, rapt with attention, munching curried bean paste on chickpea-flour pita bits with sides of refried beans and vacuum-packed lupini, as this farmer-philosophe continued, chronicling his family’s adventures in holistic agriculture and outlining his humble prescriptions for an ecologically sound, respectful and resilient humanity.

Yoder was the kind of person I like and trust immediately: windburned, tall and broad with enormous hands, dressed in the sort of practical clothing I wear and miss and don’t see too often in the city. The kind of person who works the earth and gets worked over by it in return, who loves the dirt and everything that lives in and grows out of it.

From his brief autobiography we learned that Yoder had made the jump from working for an international NGO to teaching seasonally at a community farm in Vermont, and subsequently to renting 200 or so acres on that farm to  raise chickens and plant popcorn, beans, veggies, and fruit trees.

Yoder regaled us with stories about growing up in Nepal, describing each of his small hometowns by the legume or “pulse” most commonly consumed there: field peas in one, kidney beans in another, lentils in a third. (This made me wonder/opine: how many of my hometowns could claim a single bean, or a single characteristic fruit or vegetable? Rochester, NY, for example, is most culinarily famous for its ultra-processed grease-bomb fast-food staple, the “garbage plate.”)

Throughout his talk Yoder channeled writer and eco-advocate Thomas Berry, who alleges in The Great Work that the eponymous “great work” of our time is to bring humanity into an integrated, inter-relational existence with the rest of the natural world. Berry offers no single avenue for doing this, and Yoder didn’t either: Yoder’s own “great work” is bean farming; yours might be teaching, or lobbying, or donating to organizations that fund and foster resilience (a term both Yoder and I prefer to sustainability, as the latter perhaps implies acceptance and perpetuance of an unacceptable status quo) while defunding opposite entities (Yoder celebrated the prescient and widespread “divestment” campaign, designed to drain funds from fossil fuel-supporting companies and investors, but suggested we call it “re-investment” instead. I think he’s on to something—there’s an invigorating difference, a grad school friend of mine once pointed out, between fighting for something and fighting against something.) Lastly, Yoder reminded us that we need to heal ourselves, change our own minds and hearts, before we loft off into the world to heal and change others’.

All that love, thought, energy and philosophy had derived, I realized, from this man’s hours spent with back hunched, hands in the dirt, growing, well, beans.

Throughout the night, other speakers echoed Yoder’s reverence for the humble bean. Turns out “pulses” (dry peas, beans, lentils, and chick peas) are great for both human and environmental health, with Herculean benefits belying their compact size: they’re great for diabetics, rich with complex carbs and bursting with fiber, folate, potassium and protein; they’re easy and inexpensive to grow (according to the Bureau of Labor Statistics and U.S. Dept. of Agriculture, a serving of lentils in the U.S. in 2015 cost just 10 cents to produce, versus $1.49 for beef, 73 cents for pork and 63 cents for chicken); and their root systems foster vast ecosystems of soil-enhancing micronutrients. When used as animal feed, they decrease methane release in the feces of ruminants—a non-trivial benefit, when one considers the non-neglible effects of livestock ranching, and particularly beef consumption, on global warming and climate change. You likely didn’t know it, but 2016 was the United Nations-declared “Year of the Pulses,” an initiative designed to elevate beans (often seen as a “poor man’s protein”) in the eyes of consumers, and to educate with recipes and tips for growing, sprouting, cooking and storage.

Beans have filled the protein slot on mine and my husband’s dinner plates several nights per week for about as long as we’ve lived together, but for most of that time I’ve popped open cans rather than soaking and cooking up the good stuff. My recipes had been few and unvaried, but this pulse-powered evening amped up my excitement for seeds, beans, and home-growing in general. A few nights later my husband and I finished our out-loud reading of Michael Pollan’s Cooked, which like many of Pollan’s books professes the sheer joy and mindfulness to be gained from slow, hands-on preparation of our own food. Between these two influences I have since aimed, as a general rule, to spend as much daily time in the kitchen as possible, to start with the rawest of ingredients I can find and afford, and to stir real love into the mix. (You can taste the difference.)

I’ve debated with loved ones in the past about the meaning of “revolution.” My husband equates revolution with “coup,” with fast and often violent change, and presses me on my diverse understanding of the word: that something so slow and lasting as the planting of heritage seeds in a community garden, the integration of more organics and free-trades and locally-growns into a household’s grocery shopping, or the incorporation of ecological literacy and radical empathy into a child’s education, might constitute “revolution.” A semantic difference, perhaps, but I stand by my definition.

Revolution begins with a seed, a micro-pulse brimming with energy and fertility, dropped into a plot of thick, wormy humus. And food remains the must consistent, quotidian, intimate way we can commune with the natural world. Knowing our food, preparing it (as much as possible) from scratch, appreciating its producers, and fighting for universal access to healthy and wholesomely-sourced food can bring us more closely and lovingly in contact with our own animal roots.

What is your culinary autobiography? Do you come from cooking? What foods do you know how to make from scratch, and from whom did you learn? Who among your family and friends finds joy in planting and growing, and what can you learn from them? How can you improve your household’s food purchasing and consumption? How much time are you willing to spend in the kitchen each day, and can you work to prepare your food more mindfully? Lastly, is there a kid, a little sprout in your world to whom you can teach, lovingly, what you’ve learned about food?

“There is no despair in a seed. There’s only life, waiting for the right conditions—sun and water, warmth and soil—to be set free.”

Further resources on home-growing (and eating!) beans and pulses:

-Tips on sprouting beans, from Cultures For Health

–Diet for a Small Planet by Frances Moore Lappé

–The Seed Underground: A Growing Revolution to Save Food by Janisse Ray

–Foxfire books, from North Georgia’s literary and heritage organization of the same name

-All texts by Vandana Shiva

“They tried to bury us. They didn’t know we were seeds.”

4 thoughts on “Power of the Pulse”