A bird’s nest. Neat and tidy, hidden among willow branches or tucked under a drooping maidenhair fern.

A bird’s nest. Old and tangled, a pile of sticks right out in the open atop a snag or a crumbling rock pinnacle, or sometimes right on the ground.

A bird’s nest. Obvious but hidden from view nonetheless, deep in a tree cavity. Only the entry is visible and no one but the resident is welcome.

I have spent the better part of my adult life searching for bird nests. Some are easy, like an osprey or a red-tailed hawk. They make no effort at camouflage. I understand the red-tail’s boldness but not the osprey’s. Obligate fish-eaters, ospreys are not fierce. They are easily pushed around by the larger and more aggressive bald eagle. But what can be done with a five-foot wingspan? And so they build in impossible places: atop rocky pinnacles accessible to few predators except those from above. Can you see the three chicks in the nest pictured below?

Eagles build wild nests. Layer upon layer of sticks. Sometimes there are a half dozen nests in a single territory. They’ll add fresh green to them each spring. The twigs of some conifers have natural  insecticides that ward off any parasites and mites that may have overwintered. The fresh green branches also let other raptors know that this territory is spoken for.

Some raptors don’t build nests at all. Peregrine falcons use their soft bellies to form a slight depression on a rocky ledge. Sometimes they will re-use old golden eagle nests, but they never add any material to them. Searching for peregrine nests is one of my favorite challenges. Difficult but not impossible.

But my greatest challenge is finding the nests of songbirds. They are desperate to hide them. They have no defenses except secrecy.  Their young are helpless. Altricial, we call them. Naked and downy, eyes closed, mouths agape waiting to be fed. 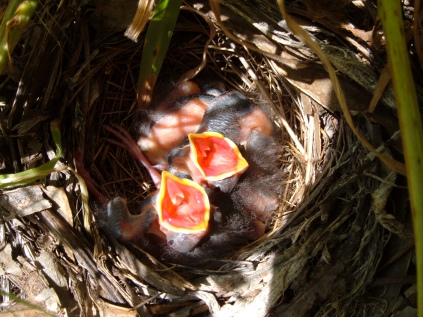 And then there are the precocious young. They are ready to go almost as soon as they hatch, like the spotted sandpiper, Wilson’s snipe, and duck nests pictured below. They can’t fly yet, but they have a better chance of escaping predators by taking to the water or being able to run, at least short distances.

The nesting season spans months for raptors, but it can be as short as four weeks for songbirds. Some species begin nesting during winter in order to fit it all in. Even where I live high up in the Rocky Mountains, some species began nesting months ago. Great horned owls, for instance, began nesting in February. Bald and golden eagles began in March, although at least a few pairs began in February. There are even young Clark’s nutcrackers. Their squawks and calls are distinctly different from the adults. Robins have been busy carrying nesting material despite the onset of a spring snow storm. But many of the insectivorous birds haven’t even arrived yet. They must wait for things to warm up and bugs to hatch out. Timing is everything.

A bird’s nest is an intimate glimpse into the animal world. Finding one is a gift and always a surprise. I’d be remiss if I didn’t give at least one bit of advice about nesting birds. Never approach a bird’s nest. It’s a difficult time of year for them and they often only get one chance at breeding. They usually have a lot to contend with without us crashing their efforts. All of these photos were taken from either a good distance or I took them as part of various work projects, with permits, to better understand breeding behavior.

When you have seen one ant, one bird, one tree, you have not seen them all.

6 thoughts on “The Nesting Season”