Somewhere outside the D.C. metropolitan area a bumbling cicada has smacked a suburban dad in the face while he is mowing his lawn. Dad leaps into the air and swats at the cicada. The cicada, a female, is attracted to the hum of the push lawn mower, mistaking its drone for a chorus of males. But she senses danger and veers toward a group of trees instead. Dad, though, is soon mobbed by dozens of other cicadas. They descend upon him with bulging amber eyes, thick black bodies, and glassy wings trimmed in orange. They are large insects (about 1.5 inches long) with the agility of a paper airplane thrown by a two-year old. They crash into his head, collide with his bare legs, and crunch under his feet. Although cicadas don’t bite or sting, they incite terror wherever they emerge. Dad abandons his mower and runs for the safety of his house wondering what biblical catastrophe has befallen his usually serene neighborhood. 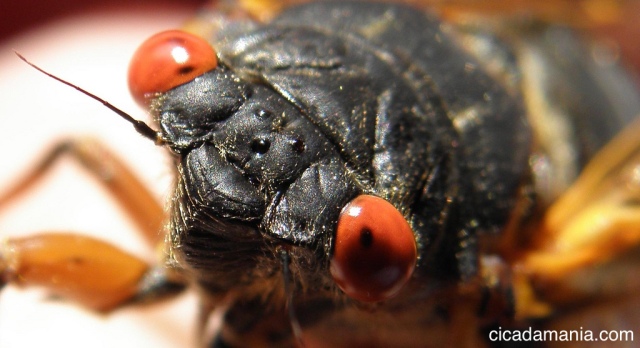 All up and down the east coast Brood X cicadas are emerging from their underground burrows to breed just once before they die. They’ve prepared for this moment for 17 years —  well, almost.

These Brood X cicadas are four years ahead of schedule. They were not supposed to emerge until 2021, but something triggered their early arrival. Was it an accident? How could millions of cicadas be wrong?

Cicadas that emerge in excess (1.5 million per acre!) and only during some years are known as periodical cicadas. There are two types – those that emerge every 13 years and those that emerge every 17 years (Brood X is composed of 17-year cicadas). Of the 155 North American species, there are only seven species that are periodical. They belong to the genus Magicicada. Magi is Latin for “more,” but I like to think of them as magic cicadas.

Magicicadas only get one chance to breed during their long life, most of which is spent underground. If successful, a female cicada will lay about 20 eggs inside a small notch carved into the limb of a sapling. She may lay as many as 600 eggs among 30 nests. By late summer the eggs hatch and the first instar nymphs fall to the ground. The nymphs then burrow about eight inches beneath the soil and nuzzle up to a tree rootlet to feed on its sugars. For the next 13 or 17 years depending on the species they’ll grow and develop until they are read to breed.

Entomologists aren’t sure why Brood X has emerged ahead of schedule, but some think it may be a sign of climate change. Cicadas only emerge after they pass through their fourth instar stage and only when the ground temperature reaches 64 degrees C. Unusually warm autumns, mild winters, and early springs extend the growing season, providing the nymphs with more sugars than normal, which could speed up their development. Alternatively, Brood Xers seem to be emerging in greater numbers near metropolitan areas such as D.C., which have much higher heat signatures than natural areas. This localized climate change could also speed up development.

But early (or late) emergence of cicadas is not uncommon. Broods that emerge off schedule are known as stragglers, even when they emerge early.

If enough members of Brood X emerge this year, they will reproduce and form a new brood that will break off from the main brood. The main brood won’t emerge until 2021. This is known as an acceleration event. But it will take 17 years to find out if the stragglers were successful.

Within the Magicicada genus there are 15 different broods that are each located within specific geographic ranges. A brood is composed of some combination of the seven species with the same life cycle. There are three species in Brood X — all of which are supposed to emerge on a 17-year cycle.

But why do cicadas have such a long life cycle in the first place? Some scientists speculate that because cicadas evolved during the last ice age, the cold may have slowed their growth and development. This may be why 13-year cicadas are usually found in warmer southern states, while 17-year cicadas are found in colder northern states. Others think that they may have adapted to ice-age conditions by prolonging their life cycle to minimize the chance of emerging during a cold summer, which would prevent them from mating since insects require a minimum temperature for flight and reproduction.

But that still doesn’t explain why cicadas emerge every 13 or 17 years. Why aren’t there also 12-year or 18-year cicadas? Or 22-year cicadas? Mathematicians speculate that because 13 and 17 are prime numbers, competition between geographically overlapping broods is minimal. Prime numbers are those that are divisible only by itself and one. A brood with a 13-year cycle and a brood with a 17-year cycle in the same location would only overlap emergence every 221 years. The four-year difference between the two types seems to be the key for coexistence among broods. Broods with less than four years between their expected emergence are unlikely to coexist because of intense competition between the various nymph stages below ground.

But the most popular hypothesis for these prime-numbered life cycles is that prime numbers prevent predators from synchronizing with them. For example, if there was a 15-year cicada and a predator with a five-year life cycle, the predator would synchronize with the cicadas every third generation, thereby gaining a boost to their population. But the same predator would only synchronize with 17-year cicadas every eight-five years. A synchronization of every 85 years is unlikely to provide any benefit to a predator’s population. And cicadas have many predators.

The life strategy of periodical cicadas is to overwhelm predators with their numbers (remember 1.5 million per acre). It’s a strategy called predator satiation. Although tens of thousands perish in the bills of birds and in the mouths of insectivorous mammals, millions of cicadas live to breed and continue their brood.

Cicadas have one of the longest life cycles of any known insect in the world, and their broods can be tracked to the early European colonization of North America. Brood X was first described in 1749 by Swedish naturalist Pehr Kalm who was visiting Pennsylvania at the time of their emergence. In his written account, Kalm notes the emergence of Brood X in 1715 and 1732 as described by others. One of those events was reported by Benjamin Franklin. At the time, they were called locusts but this is a misnomer that has persisted. Bob Dylan even immortalized Brood X in his song “Day of the Locusts,” which he wrote after receiving an honorary doctorate from Princeton University during their emergence in 1970. 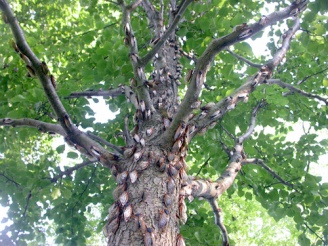 Do you live somewhere where Brood X is emerging? What about Brood VI? Brood VI  is also emerging in Georgia and in North and South Carolina, but unlike Brood X, they are right on schedule. Take a look at cicadamania to see where the different broods occur and when to expect them. You can also check out Magicicada.org for a map of the current emergence.