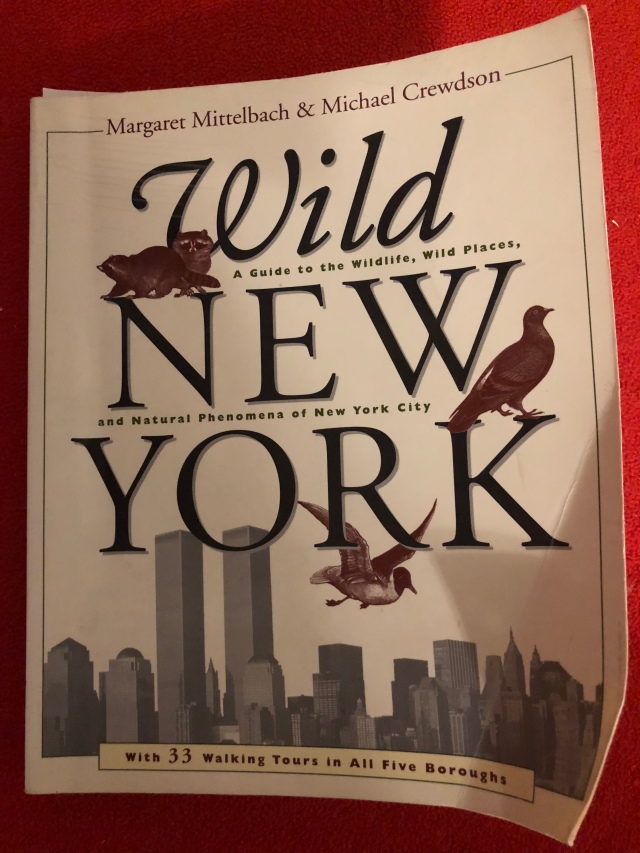 I resolved this winter to further a blossoming interest in my home ground, in the water and soil that surrounds. This attention to New York’s wildness and natural history has been too long deferred, was begrudging for most of our first years here, but with help of a recently gifted book–the seminal Wild New York: A Guide to the Wildlife, Wild Places, and Natural Phenomena of New York, by Margaret Mittelbach and Michael Crewdson–I finally am learning my turf. Mittelbach and Crewdson’s work is thorough, thick with fundamentals on everything from geology to weather, botany to forest ecology. Again and again I have been struck by their curious facts and revelatory explanations for this city’s natural phenomena—and each strike has resonated within my own city umwelt.

Here are a few:

Tectonics and Bedrock: I have rarely gloried in the geology of a place, despite its role as the susbtrate for all other ologies. But since I fought against loving New York for so long, it seemed fitting to start at the start of this city’s wild core, and this book delivered.

Here’s what’s cool about New York City’s geological story. First: underneath my own Bronx River, then flitting through the East River and bounding western Queens, is a demarcation known as “Cameron’s Line”– fractured rock indicating where, in Pangaean days, the Americas and Africa were joined.

Second: bits of bedrock that remain visible throughout the city are the remains of ancient mountains, trimmed down to their current size by time, water, and glaciation. Some of these outcrops are in my own home forest, the Bronx’s Van Cortlandt Park. (I had been missing mountains since we moved here; all the while, they were under my feet.)

Third: New York City stands on not one, but five different types of bedrock: Fordham Gneiss, Manhattan Schist, Inwood Marble, Staten Island Serpentinite, and Hartwood Formation, each with its own unique characteristics that have shaped the city’s human, and specifically, vertical growth. Fordham Gneiss is my favorite, as it’s the oldest–1.1 billion years old–and because its boulders line my running paths. Manhattan Schist is visible in of two of my old haunts–Fort Tryon and Inwood Hill Parks. Inwood Marble is, as you might imagine, white–and during early 1900s excavation for the city’s subways, workers described “bursting through oppressively dark layers of Manhattan schist into blinding white chambers of Inwood marble–a stunning scene.” Staten Island Serpentinite can be toxic, as it contains heavy metals and even asbestos–yet, it creates a unique barrens ecosystem, hosting specially adapted “weeds” and grasses where it surfaces as crumbled topsoil. And Hartland Formation is what gives Central Park its iconic boulders, including the backdrop for Belvedere Castle.

Here’s a cool fact about all these bedrocks combined: the reason Manhattan’s skyline is reverse-parabolic (it dips like a puddle) is that its bedrock is closer to the surface in some places (i.e., Midtown, and lower Manhattan–i.e. Wall Street and the Battery) than others. Between these places, as in the more charming Greenwich Village–where a person can still see the sky–towers could not be built, because the bedrock here lies too far beneath the surface.

New York City geology teaches us that despite the human character of the city’s above-ground constructions, there is no anthropogenic conquest to be had over its foundational, metamorphic baseline.

Bones Under Broadway: It is hard to look at present-day New York and imagine it wild. During our three years living on Broadway, in Inwood (Manhattan) near Dyckman Street, the fauna I witnessed were no larger than the cockroaches and mice who set up shop in our kitchen. But according to this text, a much larger creature once dwelled there: the American mastodon. Workers in 1925 found a partial jaw, along with 14 twenty-pound teeth of this creature while digging for a building foundation.

Hudson River Estuary: The Hudson River characterizes New York like no other feature. Currently named after the city’s most famous early European explorer, this waterway was known by its indigenous inhabitants as Muhheakunnuk, which this text translates as “the river that flows two ways.” This beast of a river isn’t a river at all–at least, not its bottom half. From the city of Troy south through New York Harbor, the Hudson swooshes saltwater back and forth from the sea, twice a day with the tides.

Salt Marsh City: In 2016 I was lucky enough to snag a six-month stint as an interpretive ranger at Jamaica Bay, New York’s most significant and story-rich salt marsh. While there I read as much as I could about the ecological processes of this ecosystem, one defined by stark contrasts and extremes. But this book contained new revelations for me, among them the following: that the “biological productivity” of this city’s salt marshes is six times that of “the richest farmland in the United States”; and that despite their rapid decline–at this book’s 1995 printing only about one sixth of the city’s historic marshes remained–there are still marshes in all five New York City boroughs.

Best Urban Forests: I was happy to read that the second and third places finishers in a survey conducted for this book–”healthiest forest ecosystem in New York City”–were my present and past home-forests, in Van Cortlandt and Inwood Hill Parks. The first was noted for its faunal variety, including critters I’ve witnessed there on occasion: wild turkeys, coyotes, red foxes and deer. Inwood Hill Park, write Mittelbach and Crewdson, bears “100-foot-tall tulip trees [that] remind foresters of southern Appalachian forests.” I was also happy to note that the blue ribbon winner of this “contest,” the 2,500-acre Staten Island Greenbelt, is still on my New York City bucket list.

Humans, in Nature: My readings of late have conspired to remind me that we the people live in this wild world, and that we affect it in positive (though clearly not uniformly “good”) ways. There is no such thing as “hands off”–we exist, and so, we impact. Many of New York City’s wild creatures depend on humans or human creations–for food or shelter, comfort or defense. This book gave several examples: abandoned piers in the East River have become havens for eelgrass and seahorses; migratory birds happily visit artificial ponds in city parks; JFK airport is a frequent winter home for snowy owls, because its flat treeless terrain reminds them of the arctic while providing plenty of rats and other critters to eat. Peregrine falcons nest in bridges, churches, and even apartment buildings across the city, and pigeons subsist by and large by eating what people leave behind. And then, last but never least, there is the…

Cockroach: One cannot profess to love the New York wild without reckoning with these creatures. My family knows them well, from the smaller and more common German cockroaches to the buxom, three-inch-long American variety. Cockroaches can fly. Did you know this? We didn’t, either, until one lofted off a clothing rack and landed on my husband, in bed. This book states that these creatures most likely migrated here on the ships of European settlers, and that they aren’t found in the wild: they need our cities, our crumbs, our buildings, our warmth and human humidity. Write Mittelbach and Crewdson: “Entomologists say that if people suddenly abandoned the Big Apple and turned off the heat as they left, cockroaches would probably die off. However, these adaptable little pests are such tough survivors that no one is willing to bet that they wouldn’t make it here on their own.”

My recommendation for this book is absolute–if you’re a New Yorker or are planning a visit, it’s a must; if not, enjoy it as a clear and thorough narrative of how place and human experience, however seemingly concrete and anthropogenic, are ultimately, intimately and forever shaped by the more-than-human.

2 thoughts on “Wild New York: Discoveries for the New Year”