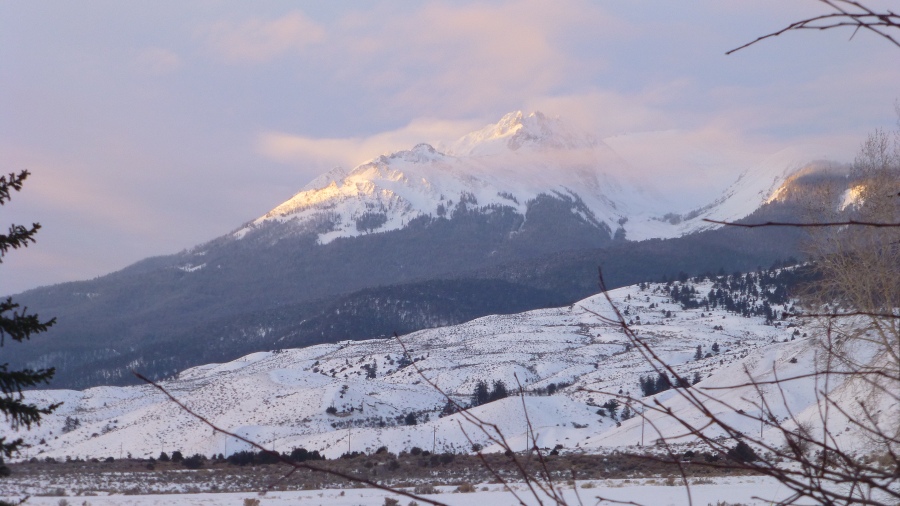 Something will have gone out of us as a people if we ever let the remaining wilderness be destroyed ….Wallace Stegner

It snowed this week. Dropped everything. Dropped a town run. Dropped cleaning the house. Dropped laundry. Dropped making the bed. When snow calls, I ski.

The first snowfall sends us up into national forest lands above Gardiner. As we climbed the switchbacks, hunter orange gave way to slush then white powder. We grinned hopefully as we maneuvered toward the road’s end.

Not knowing what to expect and not expecting much, we clicked into our skis and slid around the gate. Surprise! The snow was soft and got softer and smoother as we climbed along the track. My heart soared as my arms remembered how to place poles and my legs remembered how to push and glide. Silence held us in its grasp; the only sounds being our breath, the swish of the skis and the occasional light thud of snow dropping off branches. Tracks crisscrossed the trail as squirrels raced between trees and weasels loop-de-looped in and out of holes. The sun peaked out from behind low clouds and Ash Mountain came into view. We stopped to take it in, giving thanks for the beginning of another season of cruising over snow.

As thrilled as I was to be sliding once again on the snow, I could not help but pause and consider the battles that are being fought to keep our public lands safe from those who would destroy them for profit. Bears Ears, Grand Staircase Escalante, lands in Paradise Valley and even next to Yellowstone National Park, and more lands than I can name are in jeopardy, needing us to fight for their continued existence.

It is a tough war that we face. Losing one battle for a beautiful area like Bears Ears is irrevocable. It is an exhausting fight—while those who want to take the land for their own gain can keep coming back, keep bashing on the gates until they fall, we on the other side know that we have only one chance to win each fight and even then it is never permanent. I hate to say that it is the nature of the game… the nature of the human desire to expand and take over everything.

On December 2, the president has announced he will visit Kane County in Utah to announce a shrinkage of Bears Ears and Grand Staircase Escalante, and who knows what else since they have refused to make any information public.

My inspiration comes from public lands. I need wild places like I need air to breathe. Wallace Stegner, a much wiser person than me, said it perfectly: “We simply need that wild country available to us, even if we never do more than drive to its edge and look in. For it can be a means of reassuring ourselves of our sanity as creatures, a part of the geography of hope.”

This is my fear: our species seems to be writing itself out of the wild, our hubris in all our gadgets and shopping malls and politics has created a false ‘real’ world out there, one in which there is a huge disconnect between the importance of strong and healthy wild lands and our own physical and mental health. For me, the real world is the wild world. For me, it is of utmost importance to be at home in the wild, for if I am not at home in the wild, I am not at home in my own skin.

The snow softened a bit as we returned to the truck. The clouds cleared and the views lengthened as we slid from forest to meadow. We laughed as we thanked each other for the day and toasted to a new ski season and drove back to town, already planning our next trip into the winter backcountry of our priceless public lands.

We are the most dangerous species of life on the planet, and every other species, even the earth itself, has cause to fear our power to exterminate. But we are also the only species which, when it chooses to do so, will go to great effort to save what it might destroy.                        Wallace Stegner