“Life is either a daring adventure or nothing.” – Helen Keller

It has been a summer of cutting firewood, house remodeling, hiking for work and play, backpack trips for work and for pleasure, and more…. Time has flown. August? Hard to believe. Time has gotten away from me in the blog world. I apologize for being ‘late’ with this post. Being in the backcountry has a way of preempting connections with the rest of the world.

How do I describe the indescribable? How do I convey the magic, the beauty, and the perfection of nine days on the Teton Crest Trail? How do I explain the daily awe evoked by peak wildflowers and wild views?

Jane and I had planned to hike into Alaska Basin, known for its wildflowers and geological beauty, for a few days, then to car camp. We had tried to get permits for the Teton Crest Trail in April to no avail. However, when we stopped at the backcountry office in Grand Teton National Park, we met Jamie whose outside-the-box thinking gave us the perfect Teton Crest Trail itinerary. She asked: could we start hiking on Saturday instead of Sunday? We could. Were we flexible? We were. Could we stay out the entire week? We could. She was as excited as we were as she reserved sites, showing us the map and explaining distances.

Jane and I returned to our Gros Ventre campsite, ready to add a lot more food to our bear canisters.

The following morning, we drove to Leigh/String Lakes Trailhead and began the first of nine trail days, which took us to Bradley Lake for the night. Jane had a curious mule deer buck check out her tent about 1AM. When she hissed, the buck took off, sounding more like a heavy-footed moose running through the brush.

We woke early on day 2, hiked to a bridge and ate breakfast. We saw no one during the early hours, though as the day wore on, many day hikers crossed our path, along with a cow moose and her calf. We talked with many of the day hikers but gave the moose a wide berth. Arriving at Phelps Lake a bit after noon, we spent the afternoon hanging out on the beach, watching a family of mergansers as they swam and searched for fish to eat. I think of mergansers as the wolves of the water-world. They swim along, every so often dipping their heads under water, looking for prey. In a group, they remind me of a wolf pack, coursing for weak elk. 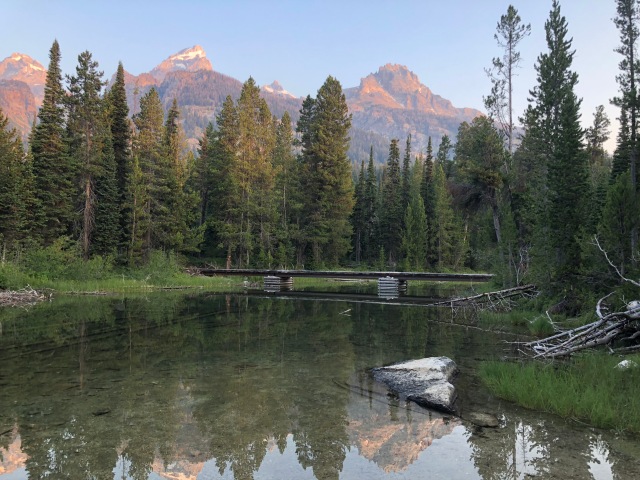 Day 3: We woke, packed and headed out on the trail to the Jackson Hole tram. 2.25 hours and 7 miles later, we bought tram tickets then found chai and bananas at the general store. (A highlight!) The tram ride took us to the top of the lift where we got off and began part two of the day: a 6.2-mile hike to Marion Lake. Our longest day and somewhat grueling with still-heavy packs and bodies not quite used to carrying the load. But by 2:30 we were in camp and dipped in the lake to wash the sweat and dust off our bodies. The views of Marion Lake were lovely and the flowers were amazing—or so we thought.

Our 4th day was much shorter: perhaps 4 miles to camp. After a slow start to the morning, we hiked to Death Canyon Shelf and found a site on the edge of the 500-foot drop about half way through the shelf. After setting up camp, we wandered on the snowfields nearby. We chatted with a few other hikers as they moved through the shelf. Some were lucky to stay there; others had to sadly move on to a further site. Two Bull Moose showed themselves as we ate dinner and scanned the canyon below. We watched as they browsed then wandered into the trees.

Alaska Basin to Sunset Lake was our goal the 5th day. We chose the Sunset Lake site for camping in order to set ourselves up for an early hike over Hurricane Pass. We found a site, set up tents, then wandered back down the trail and up another trail where we found more remote campsites for a future return visit. The flowers became more intense with thick fields and more colors and species. We understood why Alaska Basin is renowned for its beauty. 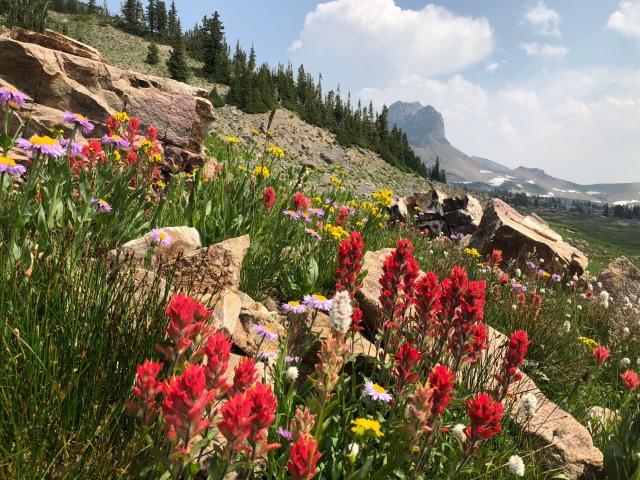 Hurricane Pass, fortunately, did not live up to its name. We hiked early; clear skies and calm winds encouraged us to stop on the pass for breakfast. By the time we arrived at the pass, we were ready to eat—the going was slow because we kept stopping for flower photos. While I’d loved the flowers, the next views grabbed my attention even more. We hiked down alongside Schoolroom Glacier. Geology in action: I saw the terminal moraine of built-up debris (rocks, stones, sand etc in an unconsolidated jumble) brought down while frozen in the glacier, then dropped when the glacier stopped and began melting as quickly as it moved forward. We could see where the lake of melted glacial water had forced its way through the moraine then became a stream flowing down South Fork canyon. We lay to sip the glacier water and appreciate the chill on a warm morning. While most of the moraine was clear of plant growth, which shows its young age, a few early colonizing plants had begun to grow: a pink vetch and a native thistle. Later, when we talked about our highlights, I listed this 6th morning as my favorite. Between the flowers and the geology, I was in heaven. Hiking down South Fork then up North Fork seemed to take forever and we were happy to finally find a campsite as near as we could get to Lake Solitude.

An early morning hike to breakfast at Lake Solitude began day 7. We fueled up, knowing that we had a long climb up and over Paintbrush Divide ahead of us. And, it was long, but the views deleted any uphill pain. The top of the divide was windy and clouds seemed to be building so we continued on down the other side, which had a few ‘interesting’ segments. A three foot down climb on the trail gave us pause, and though the snowfields were easy, I would think twice about hiking over this divide earlier in the season. Upon arrival at Holly Lake, we set up camp and then wandered as the wind built. And built. And built some more. The winds became what we would describe as ‘howling’. Or, for sailors: ‘blowing like stink’. Dust and sand covered the floors of the tents, the sleeping bags were filled with sand, and my tent zippers did not appreciate the grit. We survived the night, winds still strong, and woke the next day ready to break camp early and hike down out of the wind.

We had breakfast next to the trail on comfortable bedrock, then continued on down to the flats one last time. After running water over my tent zipper and pronouncing it ‘OK’, we decided to keep our date with our final night’s campsite at Leigh Lake. It was a good decision. Once camp was set up and we had scrounged through our bear canisters for our last lunch scraps, we lay on the beach with Mount Moran in view. The sun was warm, the winds light, the sound of waves hypnotizing. We dozed and talked and sat quietly. Jamie had been right when she insisted that we stay at Leigh Lake to end our trip. Late in the afternoon, we walked a short way on the beach and found a full can of beer that had escaped from some canoeist. On principle, we opened and drank it.