“Winter is not a season, it’s a celebration.”  Animika Mishra

You know those days. Days when you wake with anticipation. Look out the window. Call in sick (well). Cancel the dentist appointment. Days when you must, just must, get outside. On skis. Days of sun and blue skies. Days of perfect snow when crust cruising is the best it has ever been or ever will be. Days when diamonds shine on snow in sun and hang from bare branches just beginning to develop buds. Days late in winter moving toward early spring when conditions are perfect. Drop everything. Put your phone on airplane mode, take no calls, drop social media. And go. Just go.

Today was such a day. Blue skies and sun shown through the bedroom window. Diamonds glittered on bare branches in cold morning air with the promise of afternoon warmth. A windless Sunday morning summoned me. A quick phone call to my adventure buddies and two of us were off. Our destination? Swan Lake Flats via Snow Pass on Yellowstone’s Northern Range.

Jane and I skinned up and over Snow Pass and slid down onto the flats of Glen Creek. The usual wind was not in evidence and we stripped into lighter layers. Looking around we decided to depart the blown-over tracks and head off trail onto the nearby hills, exploring areas usually inaccessible to hiking. We would ski, stop, look, point and say: “How about that way? Shall we climb that hill? It would be fun to come down.” And we’d shove off in the direction that caught our fancy. We climbed one hill a few times just for the fun of the slide down, then continued, giving wide berth to a lone bull bison. We did not want him to use any unnecessary energy. He continued to lie in the snow and we moved on by with a ‘howdy’ and a wave. We followed coyote tracks along rolling hills. We stopped often for photos and appreciation. 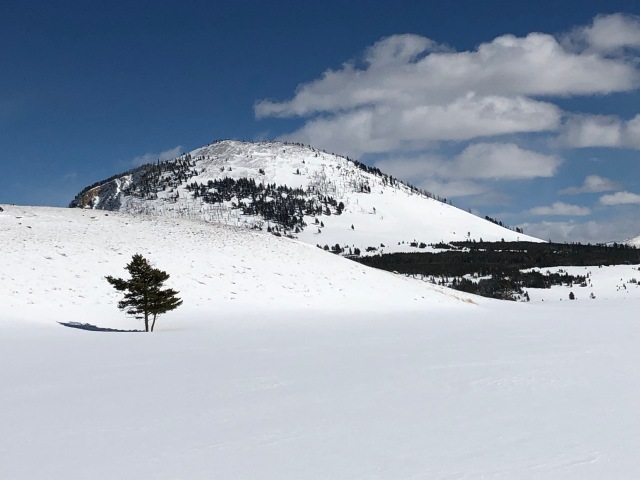 Cruising back to the flats, we continued out to the road and were fortunate to be able to ski most of it back to our vehicle. Today would be the last day, most likely, for skiing that road. Sun was melting the snow quickly and we kept alert to avoid bare patches. Coming around one corner, I looked ahead and saw a bighorn sheep ram. He lay on the side of the road against a south-facing slope. He did not move as we gingerly made our way along, skirting him by going off the road into deeper snow. Upon a closer look, we could see that he was emaciated. An old ram, not long for this world. No photos and saddened by his suffering, we quietly continued on our way after wishing him well.

How does one describe the best ski day of the year? How do I put into words the awe, the joy, the incredible happiness I felt this day? May all beings have days like this, going wherever their passion takes them.

“The very fact of snow is such an amazement.” Roger Ebert

10 thoughts on “One of Those Days”