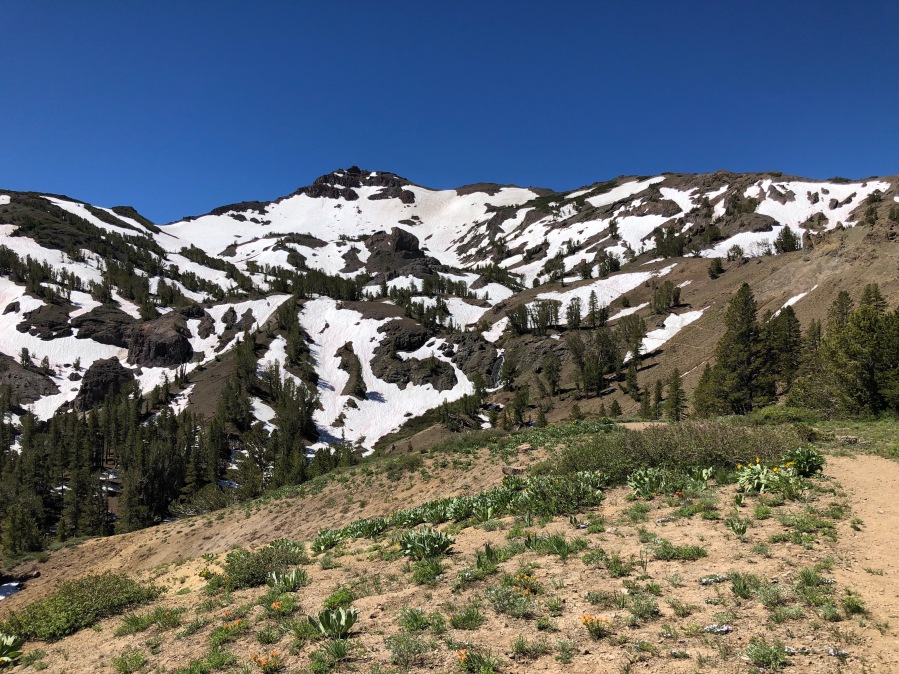 This post is a series of journal entries from 7 days hiking the Pacific Crest Trail recently. 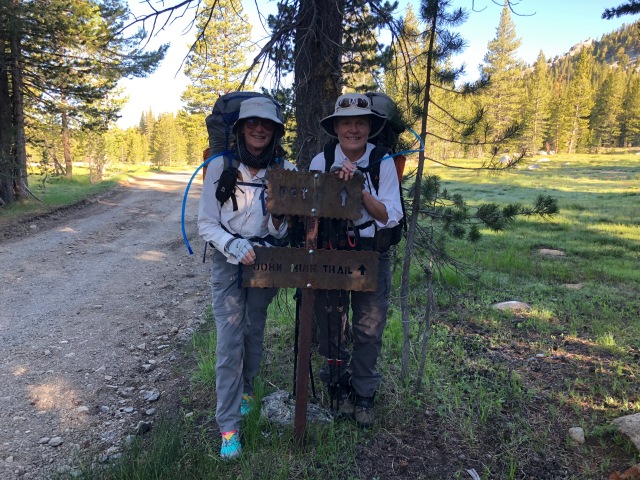 The plan was to try to finish the approximately 780 miles that I had left of the Pacific Crest Trail (PCT), to hike from Tuolumne Meadows to the Oregon Border. Back in 2010, I had bypassed the Sierra after Forrester Pass due to being alone, deep snow and inability to find the route without a GPS. Along with a deep cough that affected my breathing, I decided—not an easy decision—to get off the trail and return home for a few weeks. Later, I returned to the Oregon border and hiked Oregon and Washington to the Canadian border. In 2013, I returned to the PCT, climbed Mt Whitney with Jane and continued to Tuolumne Meadows. This year, Jane and I planned, organized and headed out on the trail July 6. Of course, this was one of the highest snow years in history for the Sierra.

Day 1: Tana dropped us off at the trailhead. The trail was clear with many stream crossings; the last of our day seemed a bit iffy with water flowing quickly and rocks. Across the stream, a man (who turned out to be Raider and Flash-we ran across them multiple times) motioned toward where he and his hiking partner had crossed and Jane and I did just fine. Later, after many other crossings, we would laugh at any concern we had felt at that stream. We camped next to the stream we would cross the following morning when water would be lower. I watched several thru-hikers cross and planned our route for tomorrow. 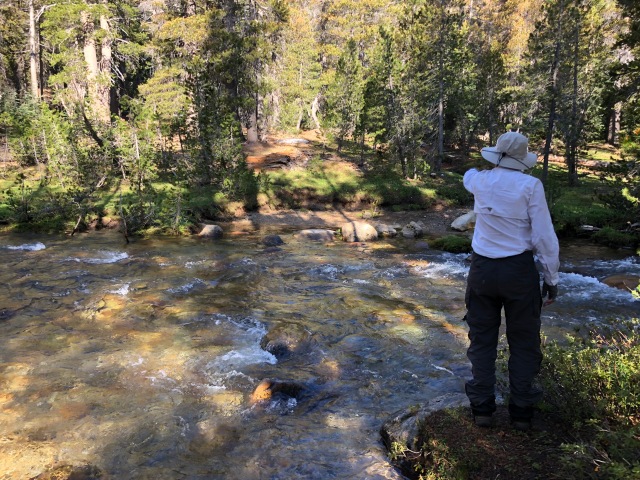 Day 2: We hit snow within a mile of our morning’s ford. Most of the day was on snow as we climbed over Benson Pass. Route finding took time but I was grateful for my GPS. We crossed a fast moving stream on a log, focusing on balance. My energy flagged and we got to Smedberg Lake late and exhausted. I found a spot of dirt without snow and we tiredly set up our tents. Raider and Flash passed by on their way to mega-miles. 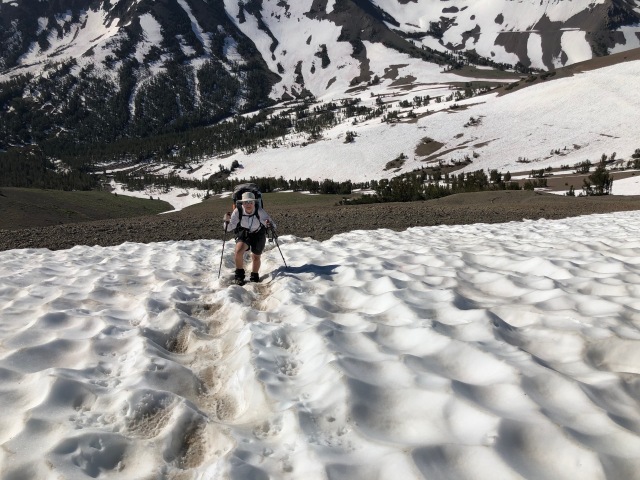 Day 3: Today was another snow day with difficult route finding. The GPS was voted our most valuable player today (as it was many other days). We had many river crossings today. I fell on one log while crossing white water. I fell onto my hands ad knees but was able to get up. This spooked me and I scooted on my butt across the next log, which was not easy. We climbed Seavey Pass and camped high near a pond to position ourselves for early morning Kerrick Canyon. It felt good to camp early enough to wash up, rinsing off dust and sweat. Frogs sang all night. I enjoyed their singing. Each time they stopped, I wondered who or what had wandered nearby. My sleep was interrupted by worries about the next morning. There are stories about Kerrick Canyon….

In 2017, Tree, a young thru hiker, died in the river. She was alone, so no one knows exactly what happened, but it is a worrisome area with snow and snowmelt making the water high and fast. The snow itself is a concern as one slip can send a hiker down onto rocks in the river. There is no margin for error in this canyon. 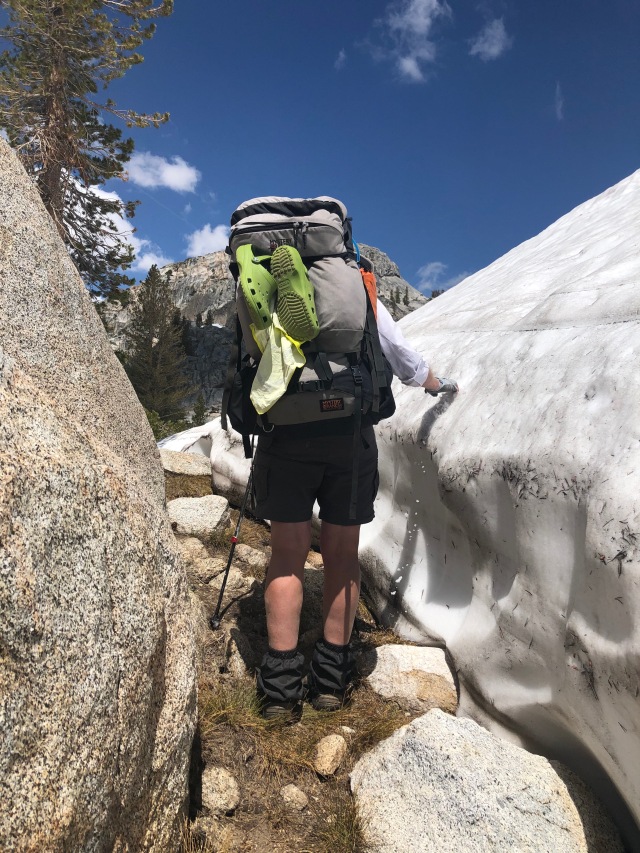 Day 3: We woke early, packed and headed down the steep snow into Kerrick Canyon. The GPS again came in handy for navigation and we made it to the bottom. Ahead of us was a steep wall of snow—on one side a rock wall and on the other the unwanted slide into rocks and river. The only way through was to climb the wall of snow and walk the pointed snow razor’s edge. We took out our microspikes, praying that they would hold us. Jane took off her pack and went first, kicking in steps. She returned and I followed her tracks and then led the way through steep sided snow. At one point the snow gave way beneath Jane’s feet and she fell into a tree well, bending her pole. After what felt like hours of snow, we finally came out onto dry flat land where we stopped for breakfast. The crossing was still ahead of us so onward we trudged, following some faster thru hikers. Jane kept them in view and she watched them go to a large tree. We followed and were able to walk across a very large and long tree while it was still clear of water. A rest stop for snacks and gratitude to have made it thus far, and it was time to climb 1450 feet back up out of the canyon. And we thought things would be easier after Kerrick!! Up and over the pass, on our way down, we came to an unnamed white water creek flowing down steeply and over the trail. We scouted up and looked across. Some could have leaped and grabbed the rocks and pulled themselves up but I knew there was no way I could do that. So down we crawled through willows to find another crossing. I led the way across several braids, and we finally, after climbing over a huge log, made it to dry land. Fortunately the trail had switch backed down to our crossing point and the trail was right there for us—no climbing back up through willows! We got to Wilma Lake by 1730 and in the tent right after dinner. Exhausted. 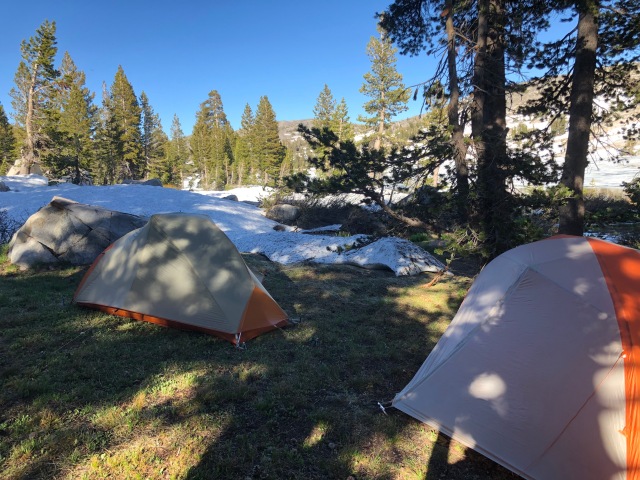 Day 4: The first of many aches and pains: I seemed to have pulled a calf muscle and with every step, could feel it. Again, lots of snow and route-finding. We stopped early to cook, I ate potatoes and either the longer break or the extra food seemed to help. After lots of snow, we looked forward to hiking through a meadow, but it was covered in above-the-ankle water. I gave up on dry shoes and soldiered through the water to get to Dorothy Lake, which still had more ice than open water. We talked about getting off trail at Sonora Pass. 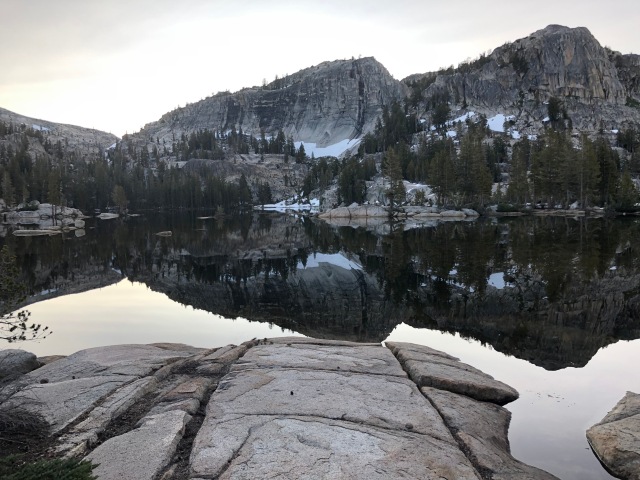 Day 5: More downhill today and less snow after going over Dorothy Pass. We had only one fast-moving tricky water crossing. We met Buddy and Silver at the crossing. Buddy lent a hand to help us across. They are a young couple thru-hiking the PCT. Silver got her trail name because she uses colloidal silver for many health issues from dry nostrils to cuts. They had come through the Sierra and Silver mentioned that she was tired. I could relate. After a chat, they headed on their way while Jane and I began packing up. We stopped later for a potato lunch, which seems to be helpful for me. Whether it is eating more, or eating differently, or maybe it is getting my trail legs or perhaps it is just that there was less snow today and more downhill, but either way, today was less tiring. 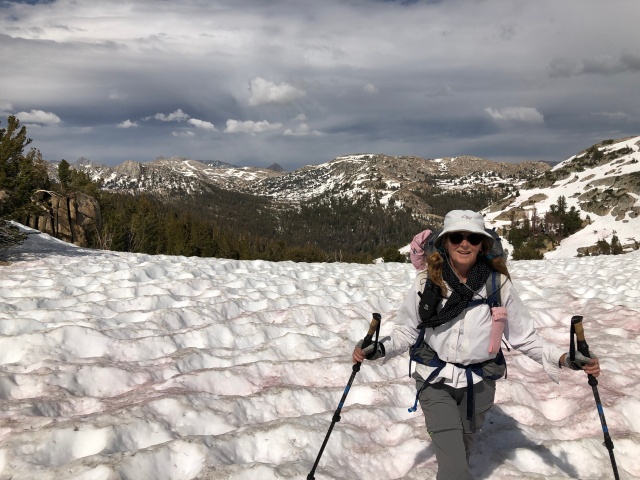 Day 6: Last night we had other thru hikers camp at our site next to a creek. Jane and I tanked up on water for today’s climb. We rose earlier than usual—0430—and were hiking just after 0500 to try to get the climb in before it got too warm. We stopped for breakfast where we could see the open part of the climb and watched other hikers cross the snowfields while we ate. We climbed to 10,600’ through snow. The ridge we walked had more open places and the blooming flowers added color to the landscape. Though we had reached what we thought was the top of the ridge, there was more climbing through the late morning and early afternoon. Then, finally, downhill–through snow, of course. We found a trough that looked like a luge run from where others had glissaded. Gingerly we moved over, sat down and, using heels and poles to manage speed, we slid. This was the most fun of everything. We got down to the trailhead just before 1600 and were told Anthony from Kennedy Meadows North would take us down to the lodge where we could get food and a room. Oh, and drinks! It is hard to describe my relief. A lovely ride down with Anthony, and we got the last two beds in the place. We shared a room with three other thru hikers, Kenny, Diamond and Blaine, all very kind people. After burgers/fries and a margarita, we slept well. 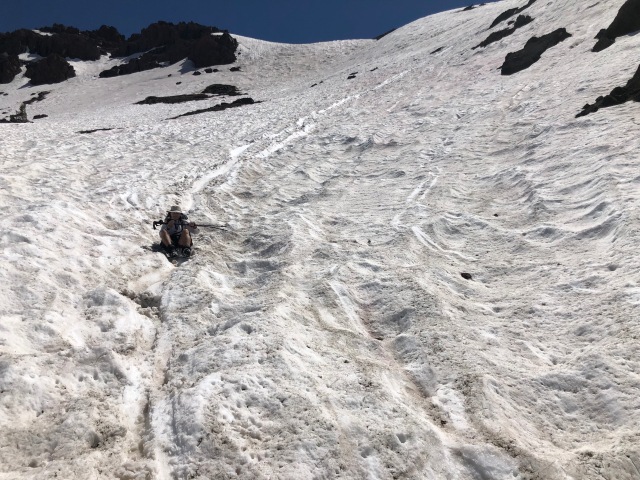 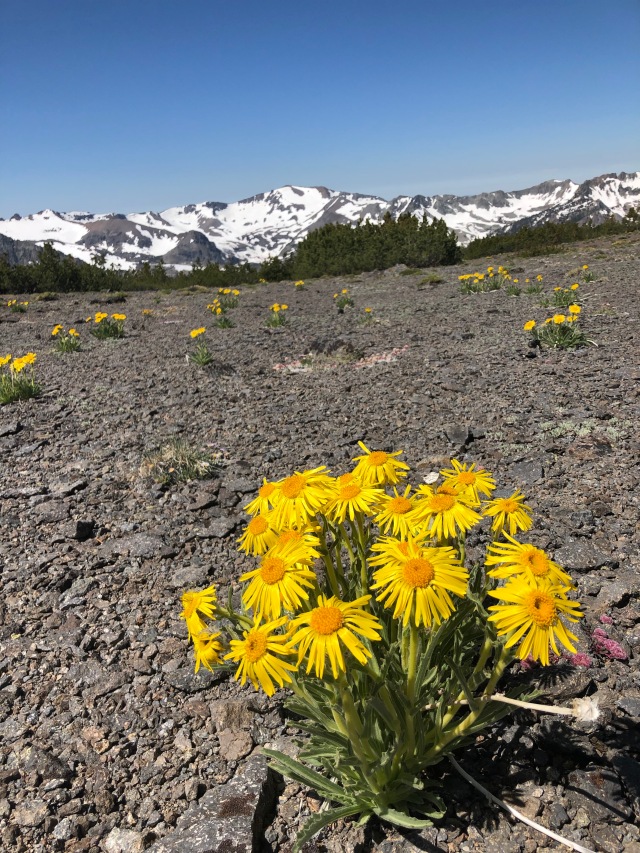 Our next move: TBD (Spoiler alert: We return to the trail at Donner Pass)

6 thoughts on “Death-Defying Craziness on the Pacific Crest Trail”